Another Wiki
Register
Don't have an account?
Sign In
Advertisement
in: Characters, Male Characters, Student,
and 2 more

Kazuma Akazawa, is the older brother of Izumi Akazawa in the manga and cousin in the anime. He's an ex-student at Yomiyama North Middle School in 1996. He never appeared in the anime.

In the manga, Kazuma has short black hair and black eyes. He and his younger sister, Izumi, look alike.

He is mentally unstable and he often locked himself in his room, hitting and banging the wall. This is likely due to a past trauma, where as, the death of his parents, a couple of years before the series had started.

Kazuma appears in Chapter 12 of the manga, he is shown hitting the wall with his fist, creating loud noises. He sneaks out of his room to get some food and broke a plate instead. This alerts Izumi and she walks out the room to check on him. As soon as he saw Izumi, he murmured Izumi's name and fled back his room, and continued creating noises. Later, he committed suicide by hanging himself in his room.

In the anime, one of the class list of 1996 has Kazuma's name on it and this could indicate that Kazuma is dead in the anime. In Episode 10, Izumi is seen crying for him at the start. In Episode 12 it is revealed that he died a year and half ago, prior to the time when Izumi met Kouichi Sakakibara. 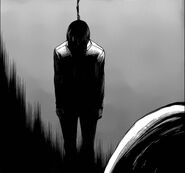