Misaki M. Studio is the shop owned by Mei Misaki's aunt, Yukiyo, where she sells her hand-made dolls. It is located in the underground of Mei's house. Her mother, Amane, also works here as a receptionist.

The studio was first seen in "Blueprint", when Kouichi was stalking Mei. After this, he often comes here, looking for her. It's one of the first locations introduced in the series and also one of the most important. The studio has three floors, the first floor, which is the main shop and features most of the display pieces, and the basement, the rooms of which are painted black and filled with even more of Kirika's dolls. The third floor is where the Misaki's live, as well as where Kirkika makes her dolls; Mei entertains Kouichi here on several occasions in the various adaptions. An elevator makes it easy to travel between floors.

The doll from the window; she appears to be a bride.

The doll which resembles Mei

Another Doll from the opening

A doll from the opening

The Angel Doll, about to lose one of her wings. 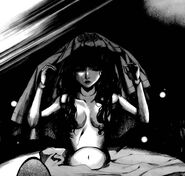 The doll from the window in the manga 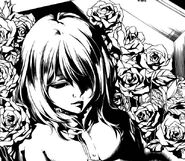 The doll which resembles Mei in the manga

Misaki M. in the manga 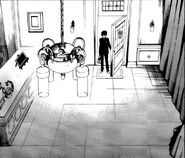 The doll shop in the manga