Another Wiki
Register
Don't have an account?
Sign In
Advertisement
in: Characters, Male Characters, Student,
and 5 more

Shingeki was a boy with white complexion and light brown hair, which he uses in a similar way to Takabayashi. He was slightly below average height, and as a high school student, he was seen only in the standard male uniform.

When he is only mentioned in the manga and the novel, the anime version is the only one that shows us his physical appearance.

Yonemura was shown as a sociable, friendly and calm young man, which was seen in the company of Takeru Mizuno, and his friends Manuba Maejima and Kenzou Kawahori. However, after the events that occurred due to the calamity, they were reasons enough for him to gradually become aware of the situation in which he was and that is why he did not participate in the school trip.

He made his debut in "Rough Sketch" as one of the characters socializing during break on Kouichi's first day of school. Shigeki was in class when Kubodera killed himself and was one of the students who fled the room.

Along with Haruka Etou, Kazue Satou, Megumi Tatara, Sachiko Nakajima , Naomi Fujimaki and Takeru Mizuno, he didn't attend the school excursion in "Glass Eye", which allowed him to survive the calamity. 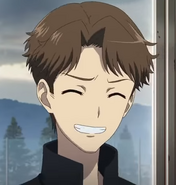 Shigeki going to school without much encouragement.
Community content is available under CC-BY-SA unless otherwise noted.
Advertisement