Another Wiki
Register
Don't have an account?
Sign In
Advertisement
in: Male Characters, Characters, Alive,
and 4 more

View source
watch 01:40
The Sandman Will Keep You Awake - The Loop
Do you like this video?
Play Sound

Takeru Mizuno (水野 猛 Mizuno Takeru) is a student of 9th Grade Class 3 in 1998, and a member of the Basketball Club in Yomiyama North Middle School. He is a minor character in the anime and manga, and one of the main antagonists of the movie.

Takeru wasn't a major fixture of class 3-3, and was not among the students who welcomed Kouichi on his first day of school. He is mentioned more often than seen, as Sanae attempted to pump him for information about Mei at Kouichi's behest. Following his sister's death, he wasn't seen as often, and did not attend the class trip.

In the manga his role is much the same, though he did shout at Kouichi for involving his sister in the curse, ordering him to stop filling his sister's head with nonsense when Kouichi tried to warn him something had happened to Sanae. Takeru went on the class trip, whereas in the anime, he did not. Mei mentioned that Mizuno helped Sakakibara after he collapsed during Akazawa's speech in the dining room, to Kouichi's confusion, as he thought Takeru still hated him.

Sanae complains to Kouichi her brother isn't especially intellectual; she laments that he's only ever read manga. Takeru, however, seems to have an easy going personality, and has several friends, whom he is usually talking to. He is fiercely protective of his sister in all incarnations of Another even though the two aren't especially close.

In the manga, Takeru was ultimately willing to forgive Kouichi for his role in Sanae's death, refusing to side with Izumi during her confrontation with Mei at the inn.

In the film, however, Sanae's death became his driving motivation. Takeru burned with a deep-seated hatred of Kouichi, unwilling to forgive him for his sister's accident. Furious, Takeru was driven to murder, regardless of personal safety, to avenge Sanae's death.

Takeru is a young man with fair complexion and average height, with short light brown hair (just like his sister) and brown eyes. As a student he was only seen wearing the standard male uniform, since he was one of the students who did not attend the school trip.

By her own admission, Sanae and her brother were not especially close, though they still lived in the same household. When she asked him about Mei Misaki, Takeru became extremely defensive, and got angry when he learned Kouichi had put her up to it.

In the manga, Kouichi sought Takeru out immediately after he heard Sanae's death, but he didn't believe his classmate, and further admonished him for dragging his sister into things. Though they weren't particularly close, Takeru was still angry with Kouichi when he learned his sister had died, as he felt Kouichi was responsible.

In the film, Takeru became furious with Kouichi following his sister's death. When he learned Mei may have been the extra student, he flew into a rage and attempted to kill her to avenge Sanae, though his actions resulted in his own death instead.

Takeru wasn't one of the students who welcomed Kouichi to class on his first day of school, and the two didn't do much more than occasionally speak while in class. At one point, upon learning Kouichi had been using his sister to get information about the curse, he angrily shouted at his classmate to stop involving her, fearing for her safety. Following Sanae's death, he wasn't seen again, and he didn't attend the class trip, suggesting he's still alive.

In the manga, when Kouichi heard Sanae's death, he immediately sought out her brother to tell him what had happened. Takeru didn't believe what had happened, though he did angrily instruct Kouichi to stop filling his sister's head with nonsense. When Kouichi's lung gave out following Mei and Izumi's first confrontation at the inn, however, Takeru helped him back to his room, much to Kouichi's surprise. This suggests Takeru had forgiven Kouichi for whatever role he might've had in Sanae's death.

In the film, this catharsis never took place, and Takeru attempted to kill Kouichi and Mei at the inn upon learning Mei was the extra student; however, he only managed to kill himself.

Takeru didn't often speak to Izumi (in fact, they don't have any major scenes together in the anime at all). However, in the manga, when Izumi was attempting to manipulate the class against Mei, she used Takeru's presumed hatred of Kouichi to try to win him to her side. Takeru, however, wouldn't budge, and before things could escalate further, Kouichi's lung problems flared up again, ending the discussion. Takeru opted to help Kouichi back to his room, making it clear to Izumi she was alone.

In the live action film, Takeru isn't directly allied with Izumi, but opts to murder his classmates alongside her when they learn how to end the Curse. They have a commonality of purpose, though Takeru opted to kill Kouichi, rather than Takako and Mei as Izumi had. It ended no better for him than it did for her, in any case. 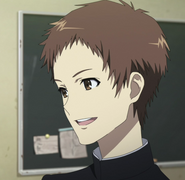