Ms. Mikami is a gentle, kind, warm-hearted and peaceful grandmother.

She made her debut in Episode 1, making her first appearance sitting in a chair next to Kouichi's hospital bed, talking about how "great" it is that he started his life in Yomiyama in the hospital. In Another 0 manga chapters, she informed Reiko about her best friend's death. She is usually seen talking to Kouichi and giving him information pertaining to Ritsuko and past events. Also, she is seen in the manga having dinner with Reiko and Kouichi. In Episode 10, Ms. Mikami appears in Ritsuko's old photos from her graduation. 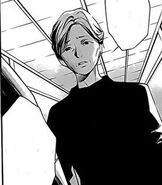 Younger appearance in the manga

Older appearance in the manga

with Reiko and Mr Mikami 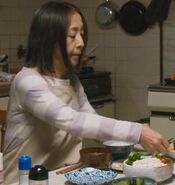