Located in the north part of Yomiyama City, it is a public school.

The actual location of this school is somewhere in the Kanto region of Japan.

The school is infamous due to an event which occurred 26 years ago, in 1972. 26 years ago, in 9th Grade class 3, there was a student named Misaki. He was a student who was popular since 7th grade, being smart, good-looking and having a great personality. All of the students and teachers admired him. When he suddenly died, his classmates decided to carry on as if he was still alive until graduation. After that, the school had become the place that is referred to as "closer to death", especially the 9th Grade Class 3.

A vest is not included for their uniform in the manga; the girls' skirts are also a more realistic length.

Students were allowed to wear a school jacket instead of the standard blazers. Takako Suigiura wore a light blue vest or jacket (depending on the season) instead of the vest.

In past years, the female uniforms had knee-length skirts. Yuki Hoshikawa, a victim of the curse, wore her uniform like that in 1983. 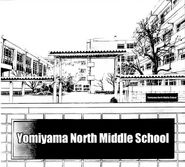 The halls
Community content is available under CC-BY-SA unless otherwise noted.
Advertisement